To quote Jack on whether to go to playground or Coney Island, “”If you’re going on a hot day you might want to go to Coney Island because you can cool off in the ocean BUT if you want to use REAL hammers, REAL nails and REAL saws then you’ll want to go to Governor’s Island.”

Children are encouraged to play together – once a common activity in childhood – without adult supervision.  They created their own goals, learned how to work together, and really enjoyed the freedom to be children together with other children.

At the end of the day, Jack had an exciting report for his parents! 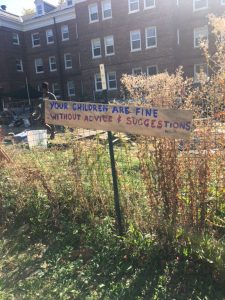 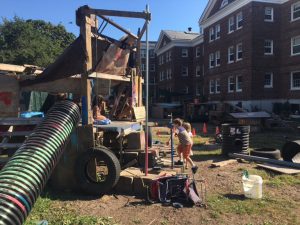 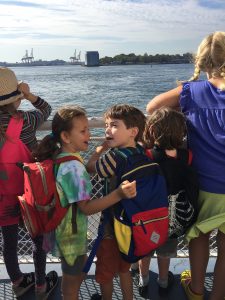 REFLECTING ON THE TRIP

A very important part of our school program is emotional work.  After the trip, teachers asked important questions and allowed the children to talk:

The children were really eager to talk about times they were upset with each other.

Child A:  I was  angry because child B would not stop sawing a house I was playing in.  I was scared the roof was going to fall on me.

The class talked about how when people are afraid, sometimes that fear turns into anger

Child C: Child A kept asking child B to stop but it wasn’t working and the anger escalated.

Children understand the word ‘escalated’ from our emotional workshops.

Child B: I wasn’t listening at the beginning because I was just thinking about what I wanted and I wanted to keep sawing because it was fun.

Child C: That made me angry that B wasn’t listening

Child B:   I started to feel bad because A was still upset, so I changed my mind to do what she wanted.

After this conversation, all of the other children wanted to share what happened at the playground to make them upset, scared or angry. They shared narratives of the situations, how they felt, and how they came to be resolved.  There was a sense of joy, and peace, it was clear that the children were happy to express feelings and go over areas of conflict.

In the process, they came to hear and understand how both children were feeling – B was not deliberately trying to bother A, but was focused on his own activities.  When he finally realized that he was causing a problem for A he knew he should stop.

It is very interesting to observe that children were relieved and happy to understand what each other were thinking, there was no rancor or bitterness, no sense of lingering anger because they were allowed to say how they felt.  The teachers were happy to provide a safe space where these kinds of feelings can be expressed.  At our school we firmly believe that these conversations prevent misunderstanding and preempt bullying which is all too common in some places.